What is a digital ledger?

In the context of finance, a ledger is a recordkeeping system that stores a company's financial data. Every transaction with the beginning balance, spending, and ending balance is recorded in ledgers.

In the context of blockchain, a digital ledger has a similar meaning, but it is in a digital form and is distributed, which means the same copy of the blockchain is recorded and synchronized to participating nodes (a.k.a. peers) or ledgers.

In a smart contract, each participating party (for example, company A buying fuel from company B) will have its own node on the ledger. All transactions conducted between these two companies are recorded on the blockchain. After being validated, transactions and blocks are added to the blockchain and each company’s node on the ledger will be updated with the latest state accordingly.

Data Gumbo’s blockchain network, GumboNet, consists of many digital ledgers, each with its own participants, nodes, smart contracts, and blocks. There is not one central ledger; each digital ledger is private to the companies who participate in the smart contracts running on the ledger and have nodes on that ledger. 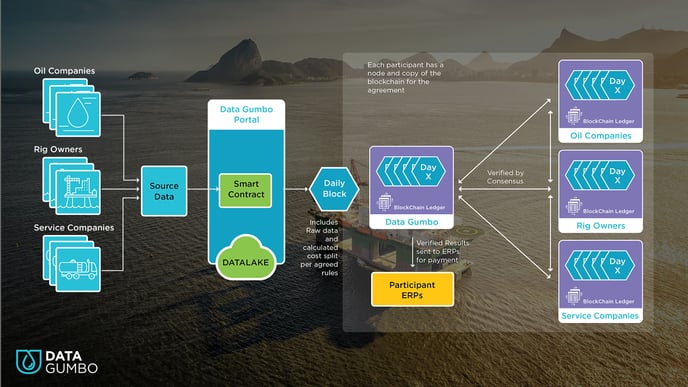